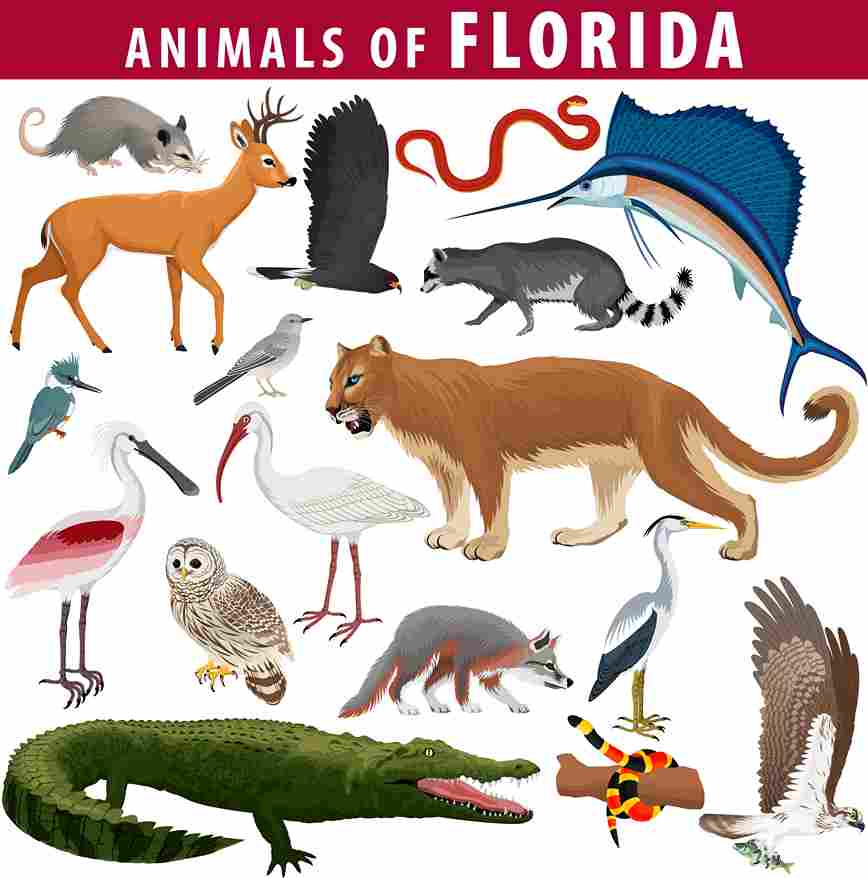 Rare Animals That Live In Florida

Florida is home to more than a thousand different animal species, 269 of which can be only found in this state. Furthermore, 87 animal species are endangered, while 37 are threatened. These animals are rare since their numbers are not that abundant anymore. You are lucky if you can witness some of them as you explore its vast expanse.

Here is a list of the rare animals that live in Florida.

The key deer is endangered and can only be found in the Florida Keys. It is a subspecies of the white-tailed deer and the smallest among the remaining species of the North American Deer. This dear only weighs about 20 to 34 kg and is only about 66 to 76 cm tall.

Key deers have a reddish- to grayish-brown color. The males grow antlers with a white velvet coating and they usually shed them between February to March and grow them back by June.

They also swim in between islands and they love living close to humans. You will usually spot them on roadsides where plants and flowers are abundant. However, this is also the reason why their numbers quickly decreased. As you can see, they are more abundant at night- crossing roads and going places. This behavior usually results in car-to-deer collisions.

When you glance at this bird from far away, you might mistake it for a Great Egret. Their resemblance is uncanny, especially with their S-shaped necks and white plumage. However, as you look closer, you will see that they have yellow legs and are larger in size.

The great white heron, also known as Ardea Herodias Occidentalis, can usually be found in the Florida Keys as they build their nests here. They are five-foot-tall and have a wingspan of seven feet.

They are related to great blue herons, but unlike them, they don’t venture far during migration. That is why you can only mostly see them within the Florida Keys.

The Florida black bear is a subspecies of the American black bear and the only bear species you may find in the Sunshine State. They have large bodies, short tails, and shiny black fur. Some of them have a white chest patch which is referred to as the blaze.

Moreover, the Florida black bear is the state’s second-largest terrestrial mammal. However, their numbers are quickly depleted due to the rapid urban development in the state. That is because they require thousands of acres of land to survive, and their habitat continues to shrink because of human developments.

Currently, there is an estimated 3,000 Florida black bears in eight isolated habitats throughout the state. With this number, they became one of the most endangered animals that live in Florida.

The American alligator is native to the Southeastern United States, which means that they can only be found in the country, specifically along the swamps and wetlands of Florida.

These reptiles are a keystone species of the Southeast as they utilize their tails to plow burrows in mud to keep themselves warm and for nesting purposes. These burrows are also used for drinking and breeding by other animals in their habitat.

American alligators were once threatened by extinction after a third of their nests were torn down by predators and natural disasters, such as flooding. They were originally classified as endangered back in 1967, but because of the efforts of locals and conservationists, the numbers of American alligators recovered and they were eventually removed from the list in 1987.

Bald eagles are solely native to North America and they are also the national bird of the United States. They are sea eagles that usually swoop down over bodies of water to catch fish.

Bald eagles are widely seen as symbols of strength and freedom. However, they became critically endangered due to indiscriminate shooting, habitat loss, and harmful chemicals (specifically DDT) that mixed with their food chain.

Dichlorodiphenyltrichloroethane or DDT is widely used in pesticides and insecticides in the United States and its widespread utilization made it mix with what the bald eagles consume. As a result, the thickness of their eggshells and their reproduction rates have been greatly impacted.

The government banned the use of DDT because of its significant impact on the population of bald eagles and since then, the population of the bird has successfully recovered. From being on the endangered list in 2007, they were re-categorized as imperiled.

To further strengthen the conservation of bald eagles, the government also issued a ban on pursuing, shooting, poisoning, wounding, killing, capturing, trapping, molesting, and disturbing them as well as their eggs and nests.

The gopher tortoise is a land-based reptile that can live up to 70 years. It digs deep burrows to make their shelter and to forage on low-growing plants. Moreover, they are the only land tortoise native to the Southeastern United States.

The International Union for the Conservation of Nature listed gopher tortoises as vulnerable because their current number is three times less than what it used to be a century ago. This decline is due to their habitat loss brought by rapid urbanization.

Get A Chance to Spot A Rare Animal in Florida

There are many rare animals that live in Florida and you might have a chance to spot them when you visit the state. Simply book a tour with Swamp Fever Airboat Adventures and get on an adventure along the beautiful Lake Panasoffkee.

In this tour, you will get a chance to see the different rare animals of Florida in their natural habitat. Also, you will have the opportunity to take a picture with the American Alligator, which is one of the protected species in the state. With all of our offerings, you will surely come home with the memory of a lifetime!

Most Popular and Best Airboat Tours in Florida